Tips To Stay Lean This Season

Tips To Stay Lean This Season 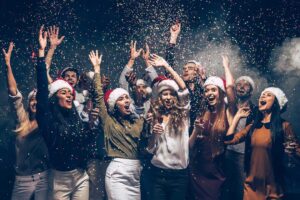 That’s what you might find yourself saying when you step on the scale January 1, especially if media reports are true that the holidays will bloat you up like a certain morbidly obese, gift-giving elf.

According to a 2014 article that reviewed research on weight gain over the holidays, the average gain between Thanksgiving and New Year is only a little over a pound. However, the author went on to say that the range in individual weight changes is large, and that “When the average gain across the year was also measured, the holiday weight was the major contributor to annual excess weight gain.”

If you’re flying to see relatives, forgo the extra legroom and try to sit by the window. A study in Clinical Infectious Diseases found that plane passengers who sat on the aisle were more likely to get sick, even on a short-duration flight. Scientists think it’s because they were exposed to more people in the cabin as the passengers boarded and walked around.

Seriously. According to Dom D’Agostino, Ph.D., an associate professor at the University of South Florida and one of the world’s top experts on low-carb and ketogenic diets (ketonutrition.org), cheese platters are often the best hors d’oeuvre option at a holiday party. “They sometimes offer a variety of nuts and meats as well,” says D’Agostino. “Eating low carb helps control your appetite because fats and proteins tend to be more satiating and typically don’t lend themselves to overeating.”

Fibrous vegetables are another good choice, so load up on veggie platters that offer broccoli, cauliflower, cucumber, and celery. “The combination of fat, protein, and fiber will prolong gastric emptying,” says D’Agostino (i.e., the rate at which your stomach processes food). “It keeps you satiated and prevents a spike in blood glucose,” which leads to energy crashes and fat storage.

You don’t have to crunch down your veggies dry, either. “Most veggie dip has a mayo and/or sour cream base,” says D’Agostino, “so it’s usually a very keto option.”

Processed foods made with refined grains and sugars spike blood glucose, creating an insulin response in the body that promotes fat gain. If you’re not sure which foods are “bad carbs,” D’Agostino recommends sticking with whole foods to keep it simple. Before you eat, ask yourself if your food ever walked, crawled, swam, flew, or grew in the ground when it was alive. If it’s close to how it looked in its glory days, it’s probably OK to eat. Bread, crackers, and other grain-based products don’t exist in nature.

“You can’t go wrong with meats and vegetables,” says D’Agostino. “Just watch out for condiments that might contain sugars or flour,” such as ketchup, and barbecue and Hoisin sauce.

#4 Swap out carbs for veggies.

When cooking for yourself, you can easily replace starchy carbs with vegetables in a number of instances. Make spaghetti squash in place of pasta (shredding it with a fork makes noodles). Cauliflower is highly diverse, and can be boiled down to make faux mashed potatoes, or pulverized in a food processor to form rice or low-carb flour for pizza crusts. It contains only five grams carbs per cup.

Research shows that the size of the portions you serve yourself greatly influences how much food you ultimately take in, and that overeating at one meal doesn’t cause you to eat less at your next one to compensate (as some people assume).

A study in the American Journal of Clinical Nutrition had subjects eat macaroni and cheese for lunch one day a week for a month. They were given one of four different portion sizes to consume every time, but told that they could have as many servings as they liked. Ultimately, the people consumed 30% more calories when served the largest portion than they did with the smallest one, showing that the more food they were presented with, the more they ate.

The take home: if you serve yourself less, you’ll eat less overall. So, whenever possible, eat the smallest serving size available to you, be it one slice of pizza, a single brownie square, a paper cup of holiday punch, etc. You can go back for more if you’re still hungry or thirsty, but odds are you’ll eat less overall than if you filled your plate every time.

A landmark study from the University of Rhode Island had women eat lunch on two different occasions. In one instance, they instructed them to eat as quickly as possible. In the other, they were told to chew their food slowly and put down their utensils between bites. When eating slowly, the subjects ate less and consumed fewer calories. Nevertheless, they actually reported feeling less hungry an hour later.

The stomach needs time to signal your brain that you’re getting full. Plus, the women in the study also chose to drink more water during their slow-eating meal, which further promoted satiety.

The times we tend to overeat the most are when we’re distracted—by conversation, television shows, games of pool with Uncle Ted, etc. Research shows that simply paying more attention to your food when you eat can help you avoid taking in too much, so try to keep snacks out of reach when your mind is elsewhere.

Protein promotes satiety, so chugging a shake before a big meal will help prevent you from gorging. But here’s the thing: the drink needs to look creamy, like a real milkshake.

A study in the British Journal of Nutrition found that the thickness and creaminess of a protein drink heightens your perception of its protein content, which helps promote the sensation of fullness even further. In other words, those fruit-flavored, clear protein drinks won’t work as well.

#9 Add greens to your smoothie.

If you already regularly make protein smoothies with fruit and healthy fats (such as the popular banana and nut butter combo), add a cup of fresh or frozen spinach to the blender. You won’t taste the greens at all, but they’ll bulk up the drink with fiber, helping you control your appetite further (not to mention add health-boosting nutrition).

If you must drink at all, that is. Dry white or red wines are low in sugar. “White Girl Rosé,” not so much. “Dry Farm Wines offers fantastic low-sugar wine options,” says D’Agostino, “which can even be enjoyed if you’re on a ketogenic diet.” Liquors such as whiskey and vodka by themselves don’t have many calories, but watch out for mixers. If you want a soda or energy drink to stir into it, make sure it’s sugar-free.

Most beers are high in carbs, but lighter beers can have less. “Check the labels first,” says D’Agostino. “A lot of lighter beers provide the nutrition facts.” To avoid doing too much damage, D’Agostino recommends stopping your drinking at the first sign of a buzz. That’s a good way to get the best of both worlds—the relaxed feeling you want from alcohol without putting excessive stress on your system.